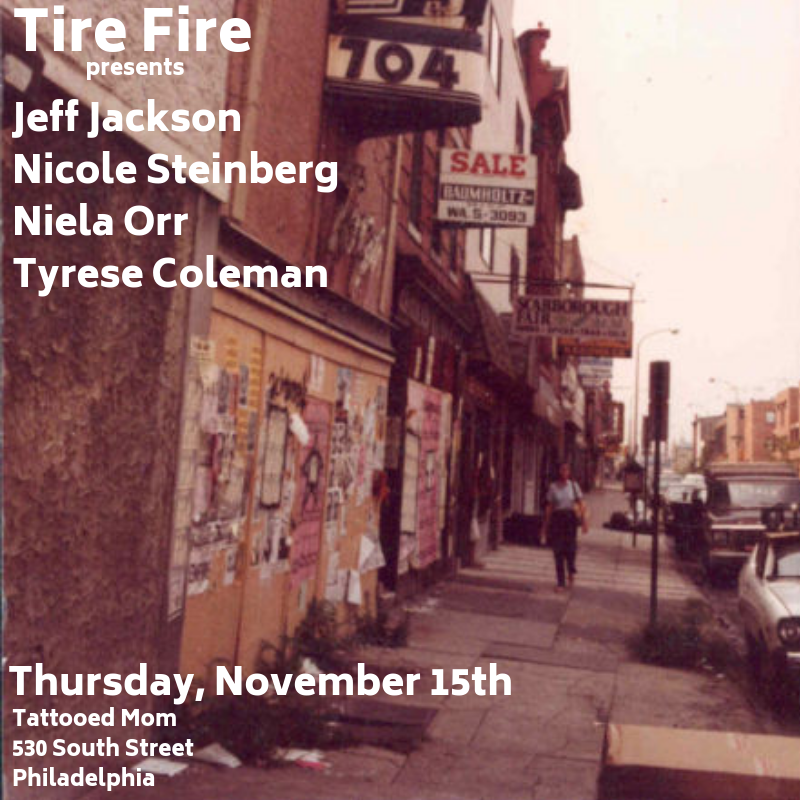 TireFire Readings fall season is flying past. For their last reading of 2018, they’ve got Jeff Jackson, Nicole Steinberg, Niela Orr, and Tyrese Coleman.

This month, we’ll be sending our donations to the Trans Equity Project, who “seek to Co-power Trans identified individuals and gender minorities through peer-based counseling and mentoring, education, advocacy, and community activism, employing sex positive and harm-reduction strategies, to improve quality of life, provide safer alternatives to risky behavior, and keep our clients healthy and well.”

JEFF JACKSON is a novelist, playwright, visual artist, and songwriter. His second novel Destroy All Monsters was published by Farrar, Straus & Giroux in Fall 2018. It received advanced praise from Don DeLillo, Janet Fitch, Dana Spiotta, Ben Marcus, and Dennis Cooper. His novella Novi Sad was published as a limited edition art book and selected for “Best of 2016” lists in Vice, Lit Reactor, and Entropy. His first novel Mira Corpora, published in 2013, was a Finalist for the Los Angeles Times Book Prize and featured on numerous “Best of the Year” lists, including Slate, Salon, The New Statesman, and Flavorwire. His short fiction has appeared in Guernica, Vice, New York Tyrant, and The Collagist and been performed in New York and Los Angeles by New River Dramatists. He holds an M.F.A. from NYU and is the recipient of fellowships from the MacDowell Colony, Baryshnikov Arts Center, Virginia Center for the Creative Arts, and Hambidge Center.

NICOLE STEINBERG Nicole Steinberg is the author of two books of poetry: Glass Actress (Furniture Press Books, 2017) and Getting Lucky (Spooky Girlfriend Press, 2013). Her chapbooks include Fat Dreams (Barrelhouse, 2018) Clever Little Gang, winner of the 4X4 Furniture Press Chapbook Award (2014), as well as two titles from dancing girl press: Undressing (2014) and Birds of Tokyo (2011). She is also the editor of an anthology, Forgotten Borough: Writers Come to Terms with Queens (SUNY Press, 2011). Her work has been featured or reviewed in the New York Times, Newsweek, Flavorwire, Bitch, and Hyperallergic. She lives in Philadelphia.

NIELA ORR is an interviews editor at The Believer and a contributing editor of The Organist podcast. Her writing has appeared in The New York Times Book Review, The Baffler, BuzzFeed, and McSweeney’s Quarterly.

TYRESE L. COLEMAN s a writer, wife, mother, and lawyer. Because she isn’t busy enough, she is also the reviews editor for SmokeLong Quarterly, an online journal of flash fiction. She is also an instructor at the Writer’s Center in Bethesda, MD. Her collection of essays and stories, How to Sit, was published with Mason Jar Press in 2018.