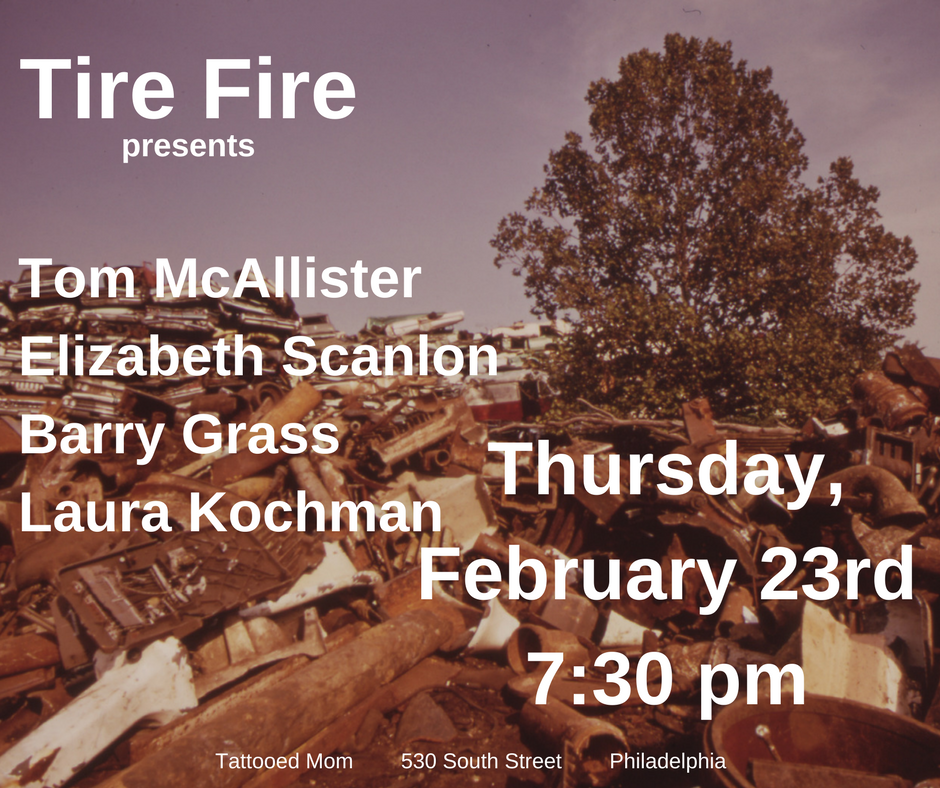 After what will certainly go down as one of the longest and most painful Januarys in American history, TIRE FIRE is back with some great readers, new books, and 50¢ pierogis!

Tom McAllister, Elizabeth Scanlon, Barry Grass, and Laura Kochman will be reading selections from their most recent work.

Donations will be collected for the Women’s Medical Fund, who provides emergency financial support, counseling, and casework to low-income women and teens in Southeastern PA who have made the decision to terminate a pregnancy but do not have the resources to pay for a safe and effective abortion.

TOM MCALLISTER is the author of the novel THE YOUNG WIDOWER’S HANDBOOK and the memoir BURY ME IN MY JERSEY. He is the non-fiction editor at Barrelhouse and co-host of the Book Fight podcast. His shorter work has appeared in numerous places, including The Best American Nonrequired Reading, Hobart, Black Warrior Review, Sundog Lit, and FiveChapters. He teaches at Temple University and lives in New Jersey.

ELIZABETH SCANLON is the Editor of The American Poetry Review. Her new book, Lonesome Gnosis, has just been published by Horsethief Books. She is the author of two previous chapbooks: The Brain Is Not the United States/The Brain Is the Ocean (The Head & The Hand Press, 2016), the title poem of which won a Pushcart Prize, and Odd Regard (Ixnay Press, 2013).

BARRY GRASS is originally from Kansas City, got their MFA in Tuscaloosa, and now lives & teaches writing in Philadelphia. Their chapbook, Collector’s Item, was published in 2014 by Corgi Snorkel Press. Their essays appear in The Normal School, BOAAT, Bedfellows, Hobart, and Sonora Review, among other publications. When they aren’t reading submissions as the Nonfiction Editor of Sundog Lit, they’re probably watching too much pro wrestling.

LAURA KOCHMAN is the author of The Bone and the Body (BatCat Press, 2015) and Future Skirt (dancing girl press, 2013). Originally from New Jersey, she currently lives, writes, and feeds her cat in Philadelphia. She received her MFA in creative writing from the University of Alabama, and has served as poetry editor for Black Warrior Review and assistant poetry editor for Coconut Magazine. Her work appears widely in journals such as Bat City Review, Artifice, Sixth Finch, CutBank, Tarpaulin Sky Magazine, and others.